The Biggest Cyber Threats in 2019 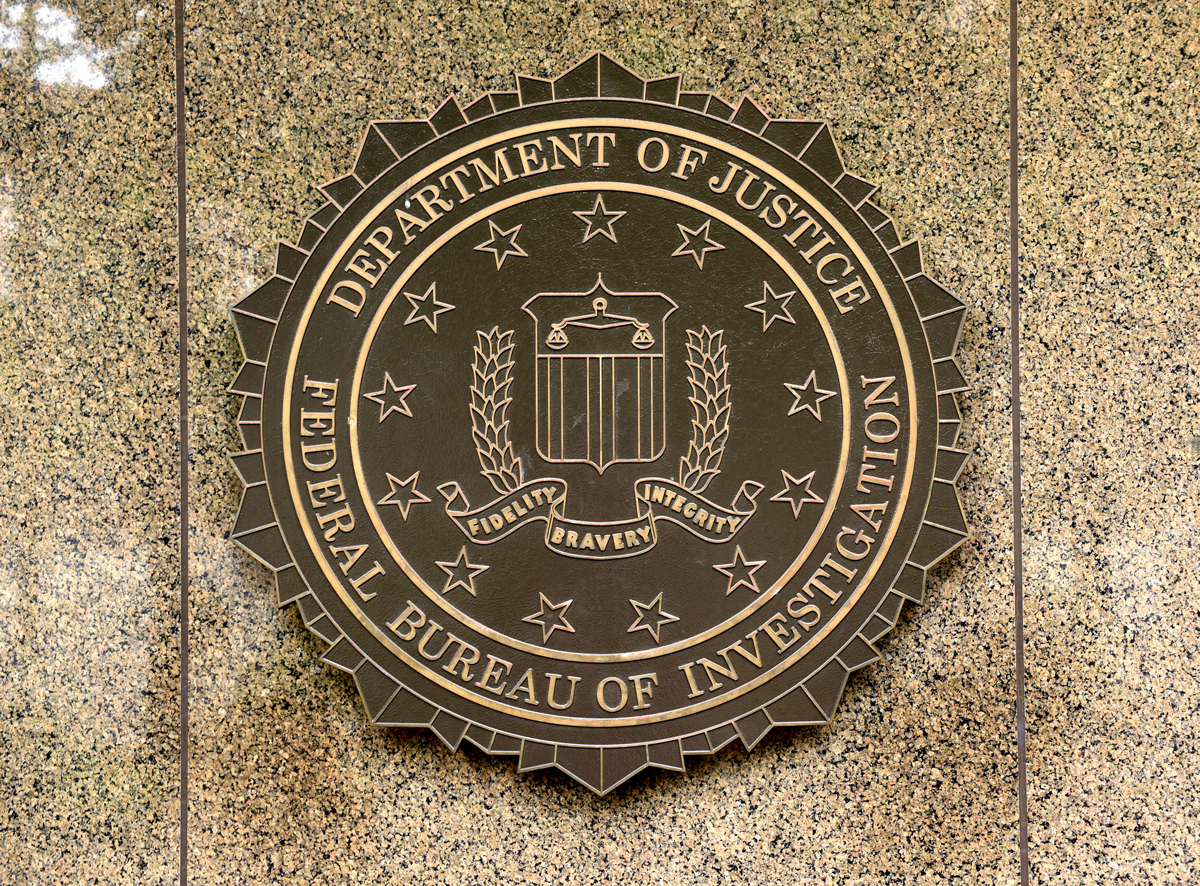 An Overview of the FBI Internet Crime Report

The FBI has released the 2019 Internet Crime Report. This annual analysis highlights the internet-enabled crimes and scams reported to the FBI’s Internet Crime Complaint Center (IC3). In the nearly 20 years the IC3 has been in existence, 2019 had the highest number of complaints and the most money reported lost. We’re going to look at where these attacks are happening most frequently, and what you should be on the lookout for in 2020.

Where Complaints are Highest

The Internet Crime Report not only shows which crimes are happening most frequently, it details where in the world they are being reported. Perhaps unsurprisingly, the highest number of complaints in the U.S. came from states with the highest populations. California, Texas, Florida, and New York had more than 20,000 complaints each in 2019. South Dakota had the lowest number of victims with 473. You can see where each state ranked on the chart below. 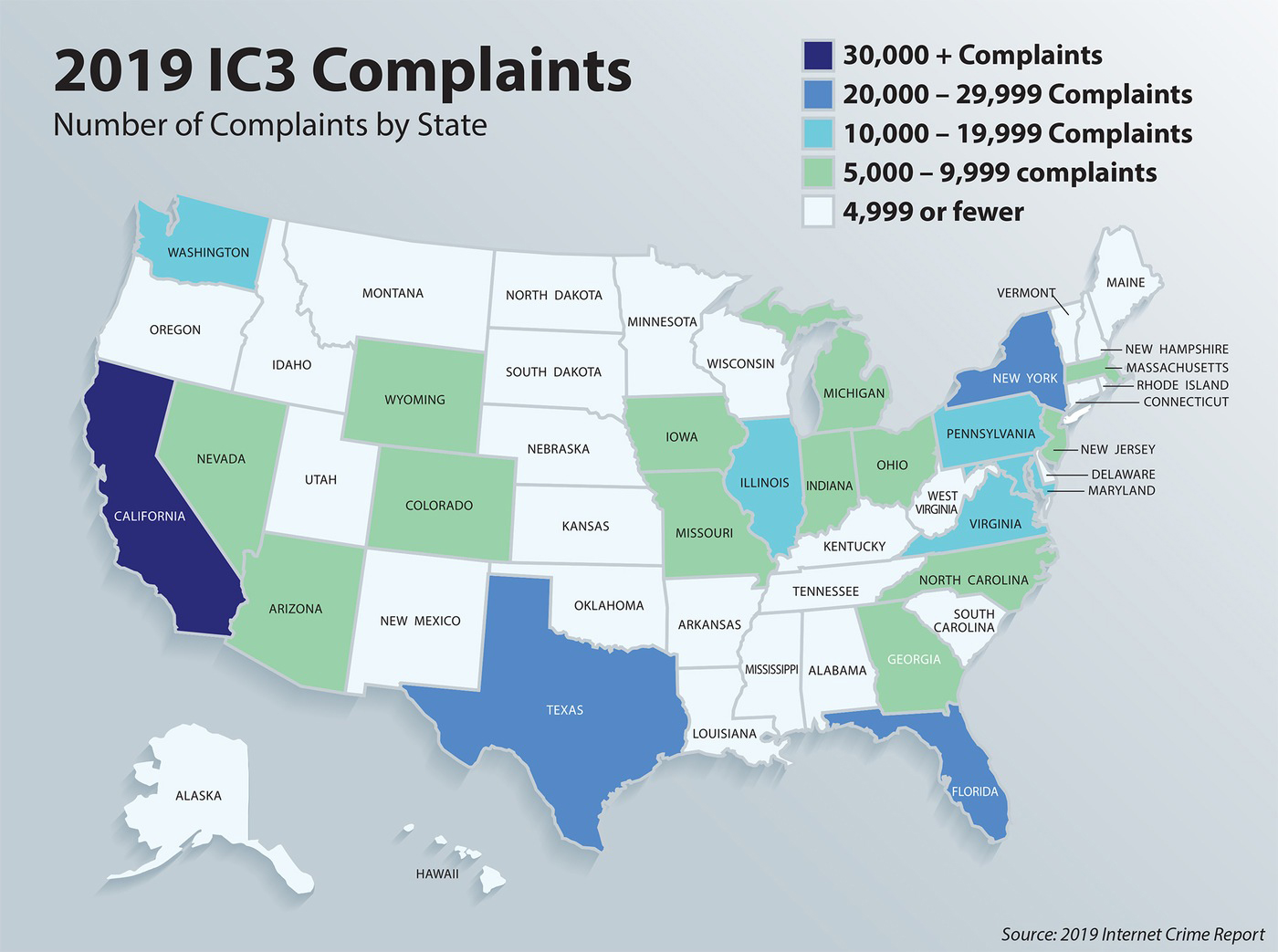 On an international scale, the United States outpaces the rest of the world for internet crime reports. The United Kingdom had just over 93,700 victims. Canada was next on the list with more than 3,700. The state of Illinois alone had more victims than Canada, with over 10,000 reported in 2019.

How Much Was Lost

The number of people impacted by cybercrime was higher than ever in 2019, but so was the amount of money lost. Worldwide, an estimated $3.5 Billion was lost by individuals or businesses within the year. The path of getting that money varied. Using social media, scammers were able to access more than $78,775,000. Virtual currency losses made up over $159,329,000.

While some states had a lower number of complaints, they still lost a substantial amount of money. As we mentioned above, South Dakota had the lowest number of victims in the United States. Despite that low ranking, they still lost more than $3,086,000 to cybercrimes in 2019.

Looking at the Internet Crime Report, it’s not hard to see who’s getting hit the hardest with online scams. People over the age of 60 years old make up the majority, with more than 68,000 victims. The total losses for that age group was over $835,164,000.

As the age range decreases, so do the number of victims. However, even the youngest group of under 20 years old still has 10,724 victims, with $421,169,232 lost. This bolsters the point IC3 tries to drive home, which is that anyone at any stage in life could fall victim to a cyber-attack as criminals become savvier.

Which Scams to Lookout For

Which cybercrimes are causing the most trouble? According to IC3 Chief, Donna Gregory, the center didn’t see an increase in the types of fraud coming out. Rather, there were new tactics used and techniques changed to carry out the existing scams.

“Criminals are getting so sophisticated,” Gregory said. “It is getting harder and harder for victims to spot the red flags and tell real from fake.”

Emails are a prime example of this. Phishing scams are not new, but the way criminals are executing the crime is changing. In the past, scams would come in the form of a legitimate looking email address, from a business executive many times, asking for a payment of some type to complete a business transaction. While that’s still being used today, there are new Business Email Compromises (BEC).

In 2019, IC3 saw an increase of complaints related to the diversion of payroll funds. In this scenario, a Human Resources employee or Payroll Department receives an email that looks like it came from an employee, asking to update their direct deposit information. Instead of the employee who appears to be sending the email, the money starts being transferred into a cyber criminal’s account.

In addition to email, scammers are also utilizing texting and pharming scams. A common method for text scams is a message claiming to be from your bank, asking you to verify your account. Once you hand over that private information, the scammer has free reign over your finances. With pharming, you could be searching for a legitimate site and end up on a fraudulent webpage. That fake site will gather your bank or credit card information, while you assume it’s safe.

Overall, the most financially harmful complaints were BEC, romance or confidence fraud, and spoofing.

How to Report Cyber Crimes

With more than 1,200 complaints per day, on average, the FBI sees a wide range of attack methods. With this knowledge, they are becoming better equipped to help victims of cybercrimes. The FBI’s Recovery Asset Team was able to recover more than $300 Million for victims in 2019.

Reporting cybercrimes quickly not only helps law enforcement possibly track down the fraudulent transactions before money is gone forever, it also helps the FBI spot trends and learn more about which crimes are most used and how to approach them.

When reporting a crime to IC3, make sure you have as much information as possible. Include everything from email addresses used, account information given, phone numbers scammers called from, and anything else that may help officials track down who’s behind the cyberattack.

To report a cyber threat or tip, you can file a complaint with IC3 online. Click here for a direct link. (https://www.ic3.gov/complaint/default.aspx) The page will prompt you to read the information they require and establishes that submitting a complaint to the IC3 is not the same as notifying your credit card company. You will need to notify your financial institution and any businesses or organizations involved separately from this complaint form. Also note, that you may not receive any additional information or communication from the IC3 regarding your submission but know that you have put the effort forth to help alert on potential scams or other types of fraud.

The next time you face a suspicious email or unwarranted text, check the source and make sure it’s coming from a reliable outlet. Don’t become another statistic for the IC3 to report in 2020.